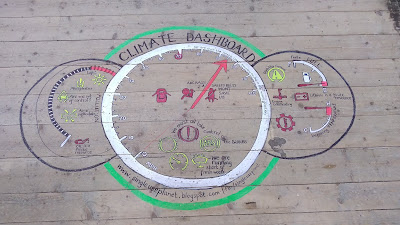 If you were driving a car and a warning light came on, what would you do?

If you were driving a car and a second warning light came on, what would you do?

Some folks we asked said, "I'd ignore the first for a while, but get them both checked out when the second one came on", others said they'd investigate what was wrong at seeing the first warning light. No one suggested ignoring both and carrying on driving.

To use this as an analogy for the climate emergency - we have all the warning lights on yet we continue to increase our speed, despite an overheating engine, diminishing resources and unstable interconnected systems. We are increasing pollution levels and we using fresh water faster than it can be replenished. We are over the speed limit, travelling too fast heading for a cliff edge with no seat belts or air bag . . .

We can't swerve this one and no handbrake turn will get us out of it. How do we get everyone to take notice of the warning signs and take action?